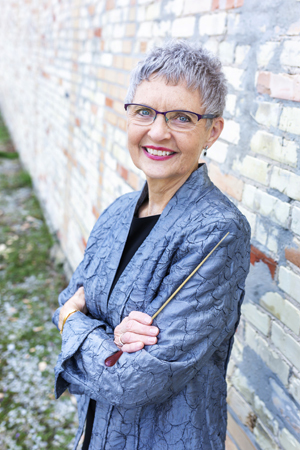 Gail Brechting is in her twenty-sixth year as the conductor of the award-winning West Michigan Concert WINDS. Under her direction, the WINDS received the John Phillip Sousa Foundation’s Sudler Silver Scroll Award, America’s most prestigious community concert band award. She has organized four international tours with the WINDS, and is planning on taking them in 2025 to Scotland and Ireland. She has had the privilege of conducting the WINDS in Chicago’s Symphony Hall, as well as the historic Carnegie Hall in New York City. Before becoming conductor, Mrs. Brechting was principal trombone with the WINDS and performed with many area music ensembles including the Traverse City Symphony, the Lansing Concert Band, The Lake Effect Brass, and the West Shore Symphony. In addition she is a much sought after soprano vocal soloist in West Michigan.

From 1996-1999 Mrs. Brechting represented MSBOA as the State Representative for the Michigan Youth Arts Festival. For over 40 years, she has been an active district and state level adjudicator for low brass, band and orchestras as well as teaching private trombone and tuba lessons to students of all ages.

She has been the guest conductor with the Acadia Winds in Louisiana, Hot Springs Community Band in Arkansas, was the featured conductor with the Louisiana Middle School Honors Band, and she served as guest clinician and conductor with the Winter Park High School in Florida. She is the 2019-2022 recipient of the Harry Begian Conductor Scholar award, through Blue Lake Fine Arts Camp. It is a two-year opportunity to work with Dr. Rodney Dorsey, director of bands from Indian University.

Mrs. Brechting is the President of the Association of Concert Bands, an International organization serving adult community bands, serving two previous terms on their board of directors. She is a member of the National Band Association, the College Band Directors Association, an Emeritus member of Michigan School Band and Orchestra Association, the World Association for Symphonic Bands and Ensembles, P.E.O. and the Women Band Directors Association. She is the first woman selected by the John Philip Sousa Foundation to serve on the Sudler Silver Scroll Award selection committee. She holds a Bachelor of Music Education degree from Central Michigan University and a Master of Arts degree from West Michigan University. Mrs. Brechting is on the music faculty of Muskegon Community College and recently retired after a 40-year music education career, 34 of those with the Reeths-Puffer Schools in Muskegon, MI.